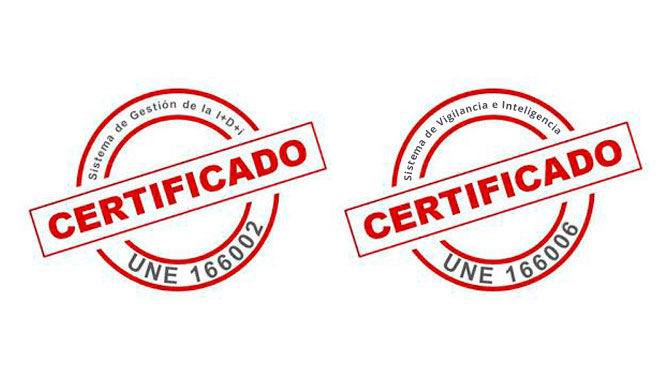 For KONIKER, innovation involves carrying out this activity in a coordinated, systematic and coherent manner regarding the different aspects that make a difference in the company’s competitiveness. That is why, apart from renewing the UNE-EN ISO 9001: 2015 and UNE 166002: 2014 standards of the Integral Management System, it has opted to adapt the AENOR Technological Monitoring and Competitive Intelligence certification according to the UNE 166006 Standard to 2018’s version this standard.

When a company wants to innovate, it must be clear that part of the success in its developments and its industrialisation is based on excellence, both in terms of technology and management.

In this sense, KONIKER has an Integrated Management System (SIG, in its Spanish acronym) that ensures the excellence of the centre’s activities allowing them to be carried out in a coordinated, systematic and coherent manner. That is why, in 2009, it was decided to promote not only the R&D Management System certification in accordance with the UNE 166002 standard, but also the Technological Monitoring and Competitive Intelligence Service in accordance with UNE 166006, which makes it one of the first companies at the state level to be certified with this new standard.

From that moment onwards, KONIKER has worked on improving the technological monitoring and competitive intelligence system, contributing its experience to the improvement and development of the R&D&i norms as a member of AENOR’s 166 committee.

This year, 2018, after more than a year’s work, the new 166006: 2018 standard arrived and the KONIKER monitoring and Intelligence system was certified under this newly revised AENOR standard.

This new standard enabled the unification for KONIKER of the high level structure of ISO standards that had already been adopted by means of standard 166002, management of R&D&i, which facilitated the joint and more efficient implementation of the Integrated System of Management (SIG) that KONIKER has on being certified with standards UNE 166002, UNE 166006 and UNE EN ISO 9001.

Find out more or adjust your settings.

This website uses cookies so that we can provide you with the best user experience possible. Cookie information is stored in your browser and performs functions such as recognising you when you return to our website and helping our team to understand which sections of the website you find most interesting and useful.

Strictly Necessary Cookie should be enabled at all times so that we can save your preferences for cookie settings.

If you disable this cookie, we will not be able to save your preferences. This means that every time you visit this website you will need to enable or disable cookies again.

This website uses Google Analytics to collect anonymous information such as the number of visitors to the site, and the most popular pages.

Please enable Strictly Necessary Cookies first so that we can save your preferences!